Marketing Communication was one of my favorite courses that I took during my postgrad. I've decided to take this opportunity to talk a little bit about one of the tasks I was given as a group project with two other fellow students.
We were given a large class data set (henceforth CDS) of about 33,000 words. It consisted of 88 'experiences' written each by an individual person describing what their favorite beverage is, either hot or cold, and why. We had to perform a corpus analysis, conduct some field work, and use our findings to create a poster for a new up-market café targeted at men and women primarily between the ages of 18 and 30 – either students or working young adults. We ended up getting A1 on it, meaning a full 100% assessment, and normally that alone would have been reason enough for me to want to post about it here. What makes it even more appropriate though is the fact that the choice of imagery, theme, slogan and the design and editing of the poster itself is entirely my doing. I am going to write a bit more about the analysis as well, however, so credit also goes to my team mates, Raphaël Peltier and Rongyu Li. 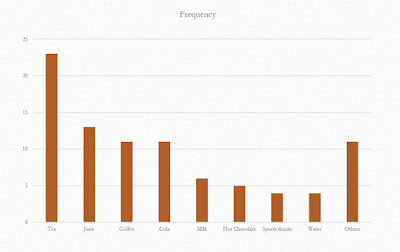 We started our data analysis from a quantitative point of view, and the first observation was the amount of favorite drinks in the CDS experiences being hot. About 44% of the experiences named either varieties of tea or coffee as their favorites. This was in line with our initial assumption that the typical local weather would cause for a lot of people to make hot beverages their preferred choice. The word “hot” was used a total of 87 times in the CDS, almost exclusively referring to the beverage and often accompanied by the notion of comfort. “Cold”, on the other hand, was only used a total of 39 times, some of which was to refer to the weather and temperature outside. Similarly, words like “warm”, “warmth”, “heat” and “heating” that were associated with hot beverages were much more frequently used than words like “fresh” and “refreshing” that are usually associated with cold fizzy or still drinks.

Additionally, key words like “friends” and “home” were also seen used in combination with the experience of consuming hot beverages, indicating that comfort can be achieved both at home and out in a group. The overall themes of comfort and relaxation were predominantly seen in the hot beverage consuming experiences. What gave us the idea for the final undertone of the poster was an additional notion that was suggested in some of the examples – the notion of your favorite drink being an inseparable part of one’s life, something that one cannot imagine living without, and almost an extension to one’s character.

Finally, our fieldwork allowed for additional data to be collected when it came to the customer behavior. Without going into too much detail in regards to the establishments we visited, one of the main observations we made was that the type of people paying a visit was largely determined by the café's location - both geographically and in relation to what was around it. Ultimately we identified two main types of customers that were largely influenced by where the café was - people who either went in groups to socialize and people who went in by themselves to do either some kind of work or recreational activities like watching videos or reading while drinking their beverage. We also concluded that, if chosen wisely, the location would also contribute to maximizing the chance to attracting both of these types.


With our interpretation of the data taken into consideration, I started by making a template for the poster that we would later be able to apply several images to in order to provide you with more choice as to which poster to use where. Like we previously indicated, the location of the outlet has an impact on the type of customers that come to visit. Since the posters I had in mind feature people, we deemed it adequate to provide several examples – featuring both men and women drinking by themselves and in groups. 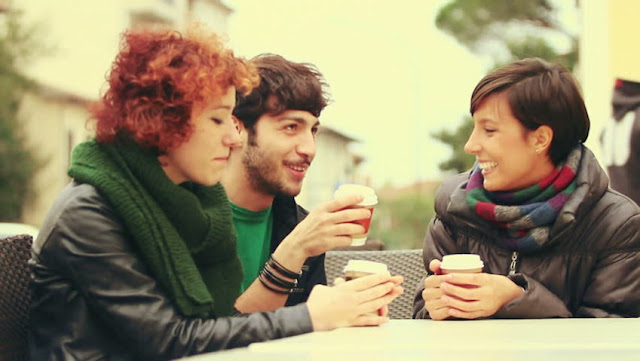 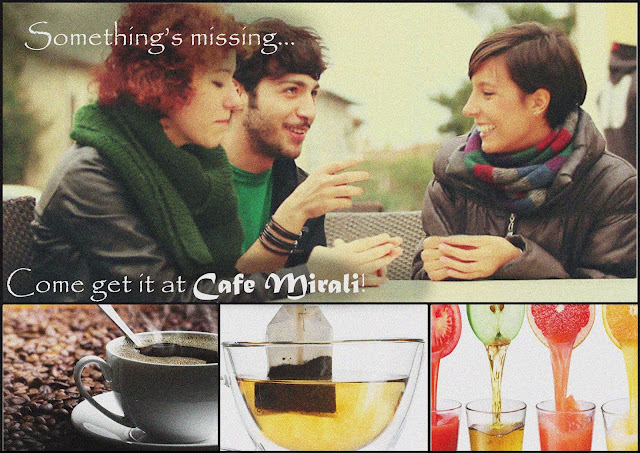 Like previously mentioned, an underlying theme that we decided to focus on was the notion that your favorite beverage is a constant part of your life, something that you cannot live without. It is something that defines you, something that is an extension of your lifestyle and personality… but it is also something that you might not always have around you. This is your morning routine, this is how you socialize. This is you. But something’s missing (notice the hands). Come get it at Café Mirali (the name was a combination of the first syllable of each of our names combined).


The choice of white as the predominant color in the two 1-person examples is by design. White is an individualistic color. It represents goodness, innocence, purity and freedom. As we have seen in advertising before, it also symbolizes cleanness and simplicity. I wanted the color to assist in conveying our message, to contribute to the overall aforementioned clarity and simplicity of it – we offer the thing that defines you, which you don’t necessarily have with you at the moment. With the group example, on the other hand, we decided to take a different, yet still straightforward approach – a richer color palate to represent the group’s diversity. 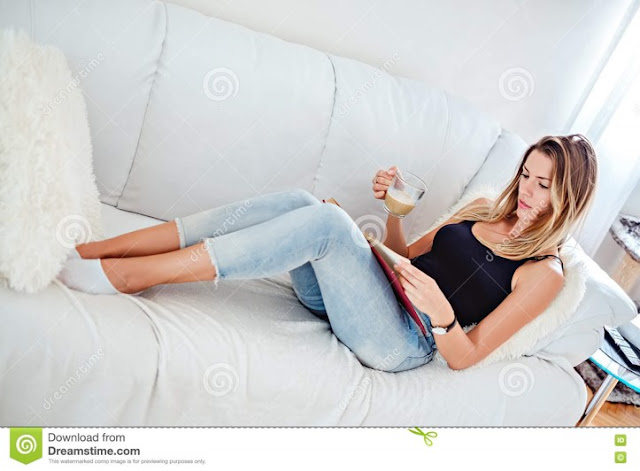 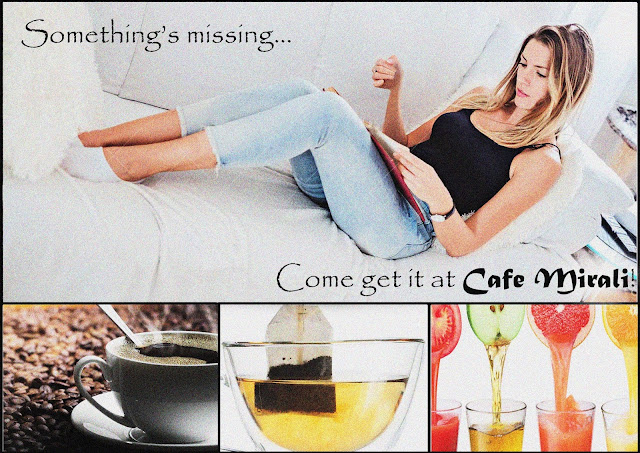 As for the three images of the various drinks, I meant for the tea to take the central position as the drink more likely to be consumed at the shop. Additionally, I wanted to make the poster more aesthetically pleasing by arranging the images of the drinks going from dark to light (either from left to right, or from top to bottom).

Posted by Millen Dei Millanovi at 8:33 AM No comments:

I can be lazy at times, but it's that very specific kind of laziness where you're having trouble bringing yourself up to actually starting something. Once I've started it though, I don't sleep until it's done. Kind of the reason why 90% of my essay writing at uni consisted of all-nighters really. Anyway, that kind of laziness combined with being the designated photographer for a big portion of your friends doesn't add up to a great combo. Since that post I made about the BUCS Individuals back in 2013 I've taken countless more fencing photos, some of them considerably better than those I've posted. In most cases I couldn't be bothered to sort through them, something that was particularly discouraged by the fact that I was constantly pestered by my team mates to post stuff on Facebook (whenever I have the option I choose to do things on my own terms) 😄 After enough pestering I would though, and if you want to see more fencing stuff feel free to have a look in my Facebook Fencing Album

Speaking of Facebook though, I'd occasionally be asked to take photos of people for their profile pics. This one is of my friend Constantine from about a year ago (as of writing this he still has it as his profile pic). We took a few photos, he chose the one he liked but then also asked me to make a few chances. Here's the final result achieved by nothing more than a few light touches with the trusty cloning tool:


Posted by Millen Dei Millanovi at 4:13 AM No comments:

So it's been about five and a half years since my last post on here. You know this question you usually get in interviews about where you see yourself in five years? Yeah, never turns out the way you thought, does it? A lot happened in my life in that time - some good, some bad, and all memorable and educational. Here's the thing though, I'm not gonna go into what I've done and been through only to try and end it on some inspirational note about how you have to live in the moment and avoid asking yourself 'what if' questions like I'm some self-absorbed millennial egomaniac. This is a photography blog after all! So instead, here are some photos of my friend Alexa shot just outside my house. Shot on a 70-300mm lens at f/4-f/5, with some light color changes and added grain filter in post. You're more than welcome to follow Alexa on Instagram


Posted by Millen Dei Millanovi at 3:34 PM No comments:

Photos I took from the tournament. Naturally there aren't any of me... but to be honest you're not loosing much from that. :D Enjoy: 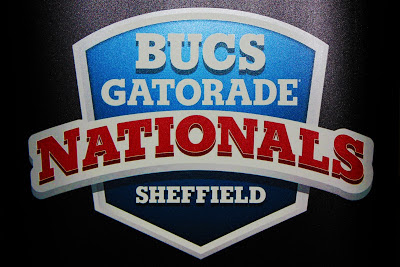 Posted by Millen Dei Millanovi at 2:29 PM No comments: